Honest Mining is coming back with a new coin on hand to list!

Ferrum Network (FRM) built its own flexible staking mechanism for ERC-20 tokens to reward the community. As such, it is possible for users to enjoy inexpensive and fast transactions on the network. This is because the network’s design allows users to deposit assets into the network and create a proxy token. Users can then trade this proxy token using the supported dApps to complete the daily payment solution. Staking Terms for Ferrum Network (FRM) Staking has some distinctive features such as early withdrawal, forfeited/redistributed rewards, and additional rewards for full maturity.

Staking in FRM is similar to a savings account as it offers constant time-based returns based on staking time. The longer you stake, the higher the rewards. FRM staking is pool based, which implies that there will be several contributors for each staking contract. It is also flexible which means users have the option to withdraw early, stake until full maturity, or withdraw somewhere in between. One of the key differences that set FRM apart from other listing is their reward structure. 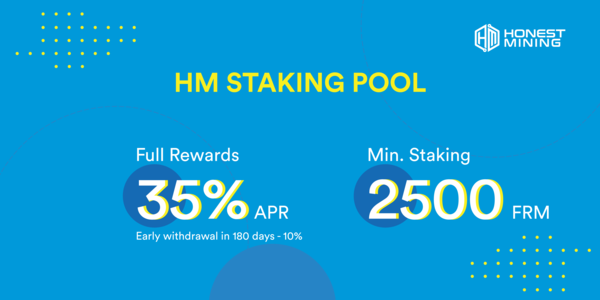 In general the basic of FRM x HM Staking Pools are as follows:

* based on Honest Mining Coin Rating

So what are you waiting for?